We propose that the vast majority of brain scientists are studying the wrong thing. The two primary goals in brain sciences is to understand how brains came to be, and how they enable their corresponding bodies to thrive. These two aspects are characterized by the genotype and phenotype of the individual. The missing link connecting the genotype to phenotype is not brain activity, but rather, brain structure. Therefore, we advocate for a shift in focus from neural coding to connectome coding. Specifically, we define connectome coding as the art and practice of discovering the connectotypes that link specific genotypes to specific phenotypes.

The goal of this manuscript is to introduce and motivate from first principles an approach to brain science, which we call connectome coding. Our thesis rests on a model of how the brain helps individuals survive and propagate their genes. In our model the goal of the brain is to develop and function in such a way as to maximize the fitness of the individual harboring the brain. We define fitness as a multigenerational cost function, in which the most fit individuals enable their offspring to thrive even under selective pressures. The genome–the set of all genes—is the mechanism by which individuals are able to provide effective strategies to the next generation. The brain—which we will model below—is the mechanism by which the genome is able to provide effective strategies to the body. In other words, for the genome to increase to probability of certain phenotypes, and decrease the probability of other phenotypes, it must include a neurodevelopmental plan that results in a brain whose activities lead to those behaviors with those probabilities. The below figure and caption explain and define our model in greater detail.

Given that the brain is connecting phenotypes to genotypes, the next natural question is which aspects of the brain “store” that information. The genome encodes a developmental plan, and crucial to that plan is axon guidance rules, that stochastically determine (in conjuction with environmental cues from the outside world) the connectivity of the brain. Thus the brain structure, and connectivity in particular, govern the resulting brain activity. Brain structure therefore plays a crucial role in the above model: it is brain structure, rather than brain activity, that is the missing link between the genome and desired behaviors. 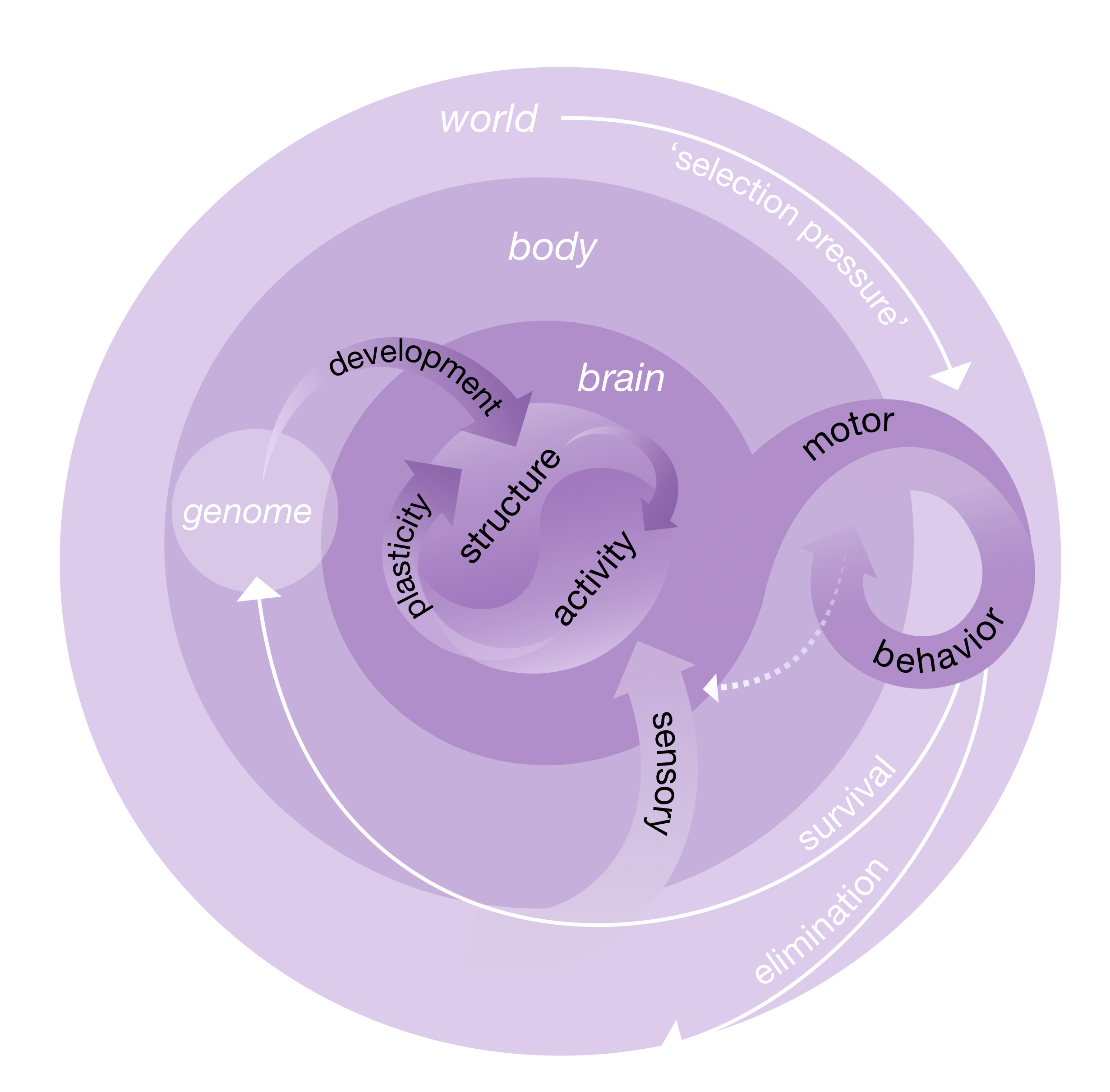 The Connectome as a Model of Brain Structure

Brain structure is a complex multiscale abstraction characterizing many aspects of the brain. The connectome, as elaborated upon below, is our model of brain structure. The word “connectome” was independently coined in 2005 by both Professor Olaf Sporns and Dr. Patric Hagmann. Sporns defined the connectome as “a comprehensive structural description of the network elements and connections forming the human brain” (emphasis added).

The above definition leverages the concept from graph theory of a network, or graph. Any network is defined by two sets: a set of nodes (or vertices, or actors), and a set of edges (or arcs, or connections) between those nodes. Some networks are directed, meaning that edges communicate from one node to another, but not necessarily vice versa. Other networks are undirected, such that communication flows freely in both directions. Also, some networks are weighted, meaning that associated with each edge is a “strength”; otherwise, the network is binary, so edges are only “on” or “off”. Loops are allowed in some networks, meaning nodes can have edges with themselves. Finally, the graph, individual nodes, and edges may all have attributes. For examples, nodes may have labels, corresponding to which of several groups they participate in.

The connectome, according to this definition, can incorporate the entirety of brain structure, and it crucially includes connections between the elements. This is in stark contrast to typical discussions of anatomy, in which various morphological and functional properties of individual brain elements may be studied, but rarely connections between those elements. Since the original definitions, over 3000 publications have used the word “connectome”, and its meaning has expanded. Below, we provide our definition, which is an attempt to be as clear and concise as possible, while incorporating a wide net of its current usage.

This definition implies that a given brain could have many different connectomes at different times, or at different resolutions, or of different types, etc. Given these choices, one can measure the parts of the brain to estimate their properties and activities. Linking back to the above approach to scientific explanation, we can therefore think of a connectome as a kind of explanation of the brain: the parts are the nodes, the activities characterize the kinds of edges, and the organization specifies which edges are present.

Figure 2 shows several different connectomes, to illustrate the flexibility of the connectome concept. Each is estimated from a different species spanning from the simplest to most complex animals, with widely disparate definitions of what consistutes nodes and edges. 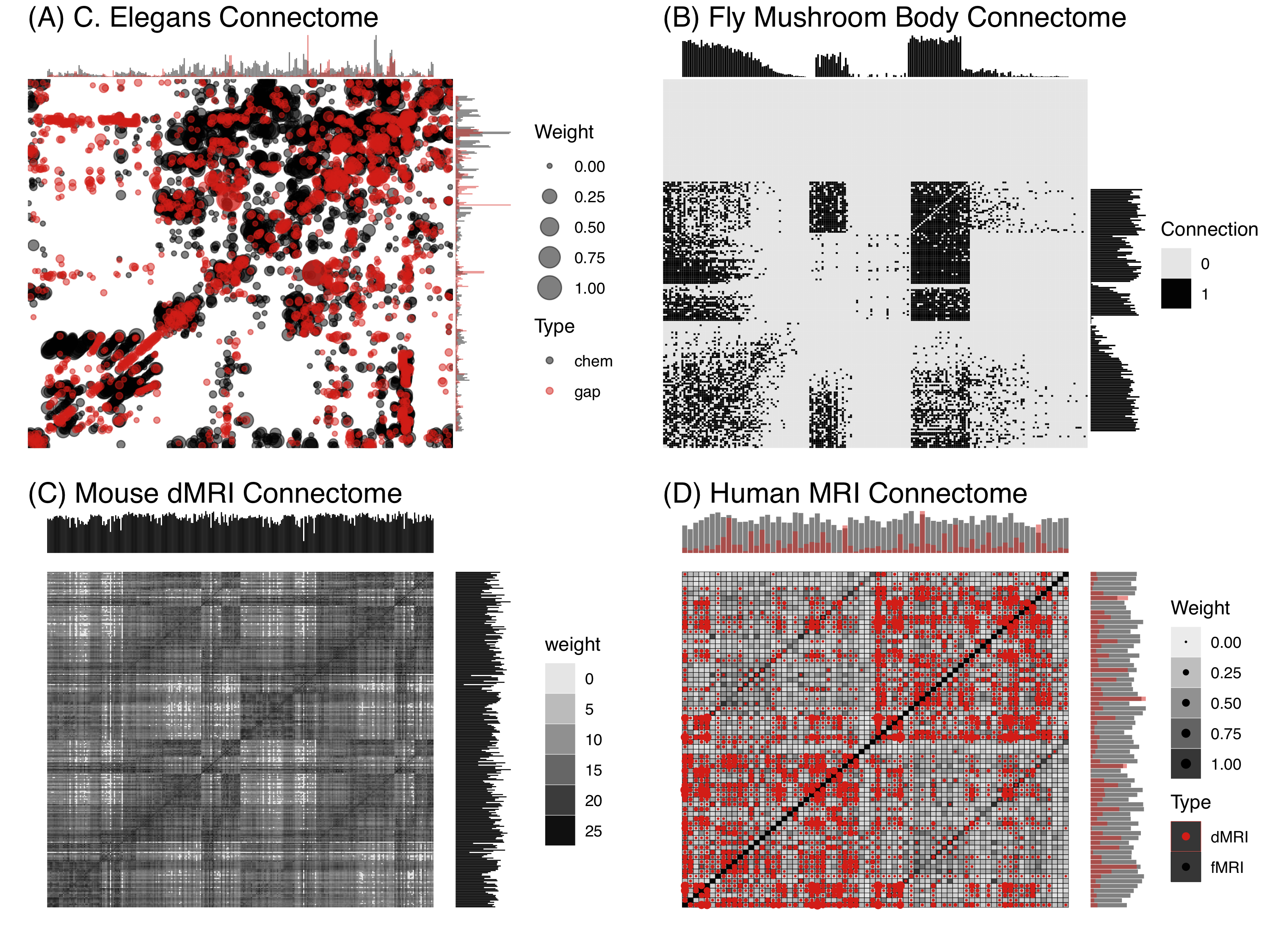 Figure 2 Connectomes spanning four levels of the phylogenetic tree, each acquired using different experimental modalities and spatial resolutions, ranging from nanoscale (electron microscopy) to macroscale (MRI regions). An adjacency matrix of a network shows the strength of connection between any pair of nodes. The connectomes are depicted as weighted adjacency matrices; for the worm and human, the connectomes are multi-connectomes, with two different edge types, denoted by two different colors. In each case, the nodes are sorted by region. Moreover, along each connectome we provide the degree sequence, that is, the sum of edge weights for each node.

What is and what is not, Connectomics?

In classical graph theory, nodes have no labels or other attributes, and neither do edges (including weights). Thus, commonly in connectomics the node labels, edge weights, and other properties are discarded during the analysis. Note, however, that there is no way to estimate a connectome without making decisions about which properties to incorporate, even if one can ignore them in the downstream analysis. However, the existing set of tools commonly used in connectomics does not incorporate these properties, thereby motivating extending the standard network analysis toolbox.

Note that we have not limited the definition of a connectome to be comprehensive set of all nodes and edges, because the concept of being comprehesive is not philosophically tenable. Even given the constraints of a particular spatial resolution and extent, the connectome varies over time, and various attributes could or could not be incorporated into the definition. In this case, referring to it as comprehensive is a bit vacuous, as it is only comprehensive relative to the imposed constraints, and everything is comprehensive with respect to some constraints. Thus, there does not exist a comprehensive connectome, even for an individual at a particular time. This is in stark contrast to an individual’s somatic genome, which is the genetic sequence of the mother cell of the individual. In genomics, each person really does have a single genome, and one can, in theory, estimate it with high accuracy. For this reason, calls to measure the “complete connectome” demand further elaboration and justification.

Connectome Coding as an Approach to Learn About Connectomes

An example is the morse code, which is a system of rules that translate tones, lights, or clicks to alphanumeric characters. The morse code happens to be deterministic and “one-to-one” meaning that each sequence of beeps tranlate into a single character, and vice versa. The genetic code translates nucleotide triplets into amino acids. The genetic code is also deterministic, but it is not one-to-one, because multiple triplets encode the same nucleotide. The neural code translates between neural activity (typically spiking activity) and sensory input or motor output. This code is probabilistic, meaning that many different patterns of activity can encode the same stimulus or behavior, and a stimulus or behavior can elicit many different neural activity patterns. We are interested here in a different kind of code, which probabilistic governs connectomes.

A Statistical Formalization of Connectome Coding

In connectome coding, based on the above model, we have the following three random variables:

The above probabilistic description does not incorporate the concept of causality. However, our conceptual model does assert a causal structure. Specifically, the brain state at any time can impact future brain states, as well as future body states. The body state at any time can impact future brain, body, and world states. And the world state can impact future body states. Note that the world cannot directly impact the brain, without going through the body, and nothing can go backwards in time. The world state also determines, in collaboration with the body state of two individuals, the initial conditions for subsequent generation brain and body states. One of the implications of this causal dependence structure is that for the genome to encode the probabilistic rules of behavior to facilitate the organism winning the evolutionary game, it must go “through” the connectome. In other words, formalizing our conceptual model provides another perspective on the role of connectome codes: the causal mechanism connecting genes to brain activity and behavior requires going through a connectome. Since behavior is ongoing, dynamic, and responsive to the environment, and the somatic genome is static, the genome must essentially encode a blueprint that guides the construction of a vessel whose physical properties are such that they encourage “high value” behaviors. That vessel is the connectome. In other words, to get a desired phenotype, the genotype must specify the development of particular “connectotypes”. Note that the parameters of this model can also be time-varying, although that adds a level of complexity beyond the scope of this perspective.

This view of connectomes, connectome coding, and connectotyping, is, to our knowledge, essentially novel. That said, it is a conceptual and formal model that one can use to interpret any previous study of connectomics. Perhaps more important, we hope it will help guide the development and ideation of new connectomic studies, by providing a paradigm within which to ask, formalize, and eventually questions about neural circuit mechanisms, how they work, how they fail, and how they can be improved.

The above notes are based on an invited talk I gave at Baylor, and then a tutorial I gave at the Society for Neuroscience in 2017. More recently, I was asked to write an article for Current Opinion in Neurobology, which will be based largely on this blog post. This content flowed most recently from conversations with Brett Mensh, Carey E. Priebe, and Eric Bridgeford, who will be co-authors on the resulting manuscript. I presented a slide version of these contents at the Functional, Structural, and Molecular Imaging, and Big Data Analysis Short Course at SfN in 2018.